All of us who spend money on Facebook ads want to get the best ROI for each click, tap, view, or engagement we pay for. To that end, Facebook has created a useful tool for those of us who measure success in leads. They’re called (ironically) Lead Ads.

It’s a very simple concept: eliminate the clicks to convert.

If your target audience never has to leave Facebook’s cozy little party, that’s one less barrier to starting a relationship. You can begin serving them immediately by making their life easier by a click or two.

There are some things to consider:

But there are opportunities here. If you’re comfy with this, and want to give it a shot, Godspeed!

Here’s what you need to know to start testing:

Facebook Lead Ads: Test Drive Results(Jon Loomer)
“One of the obstacles to a good user experience on Facebook is the poor load times when clicking an external link. Facebook has started testing and rolling out a series of features to help combat this, including instant articles and the “Buy” button.

“Lead ads are yet another attempt to keep users on Facebook. In particular, most advertisers have seen the issues with collecting information from users while on a mobile device. While costs to reach and get engagement tends to be cheaper on mobile than on desktop, getting the conversion is usually more expensive.” – Jon Loomer

Why read this? How-to with lots of good pictures, recommendations for each step. Based on real-world results of using Facebook Lead Ads. Highly recommended.

Why read this? Everything you need to know to get started. Step-by-step walkthroughs with pictures, plus usage tips to get the best results. 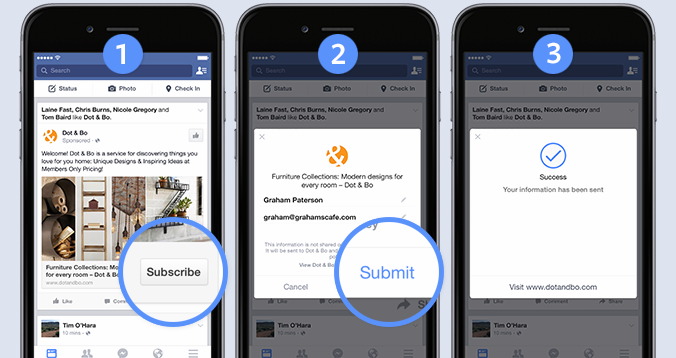 image by Driftrock (check out his article)

“What are Facebook lead ads? They are the ultimate lead generation ad format! Using a standard News Feed ad, clicking the call to action launches a native lead form on Facebook. The form even prefills things like Name and Email to save time (the user can edit these fields before submitting if they like). With such a pain-free form, the conversion rates are huge, so cost per lead is often much lower than sending to a landing page.” – Gabi Barbosa

Why read this? Great overview with pictures and best practices.

Facebook Lead Ads: How To Use Them Effectively (Forbes, 2015)

“They’re essentially a more in-depth version of Twitter’s lead generation cards. Lead ads… allow users to sign up for a newsletter, contest, more information, or any other gated content without leaving the network.

“Here’s how it works: a user sees a marketer’s ad, along with a call to action such as “subscribe.” Click on that, and you’ll redirect to a sign-up form that looks suspiciously like one you’d find on a typical inbound landing page – except that Facebook automatically populates information from your profile into relevant fields. Users only have to fill in the missing information, hit “submit,” and they’re captured as leads without ever leaving Facebook.” – Mike Templeman

Why read this? High-level overview of the Lead Ads option.