Cooking has been a lifelong passion and study for me.

Some of my best memories of family, exploring cultures, and meeting new people have been around food.

Six or seven years ago, I realized I had a gap in my knowledge: Selecting, seasoning and cooking whole pieces of meat.

We didn’t have a whole lot of money growing up, so Mom made due with what she had. When we ate meat, it was usually chicken breasts or ground beef. Maybe, on rare occasions, a roast or a pork chop.

Mom was a fantastic cook in many regards. She excelled at making desserts, in particular. Meat was not her strong suit.

I don’t like holes in knowledge when it comes to my hobbies, so I set out to learn.

A friend of mine had one of those fancy beef outfits where the cows get massages to Mozart or whatever, and he talked me into buying half a cow.

It was amazing beef. I ruined about half of it.

It began to dawn on me that I was playing an expensive game without knowing any of the rules. I was operating by the “Take the meat, cook it till it’s grey” culinary method.

And yet, I knew people who could make absolutely delicious steak with exactly the same cuts I was using. And their cows didn’t even have daily beer baths! I was intrigued.

And so began my forays into grilling, barbeque, and all things fire, wood, and meat. 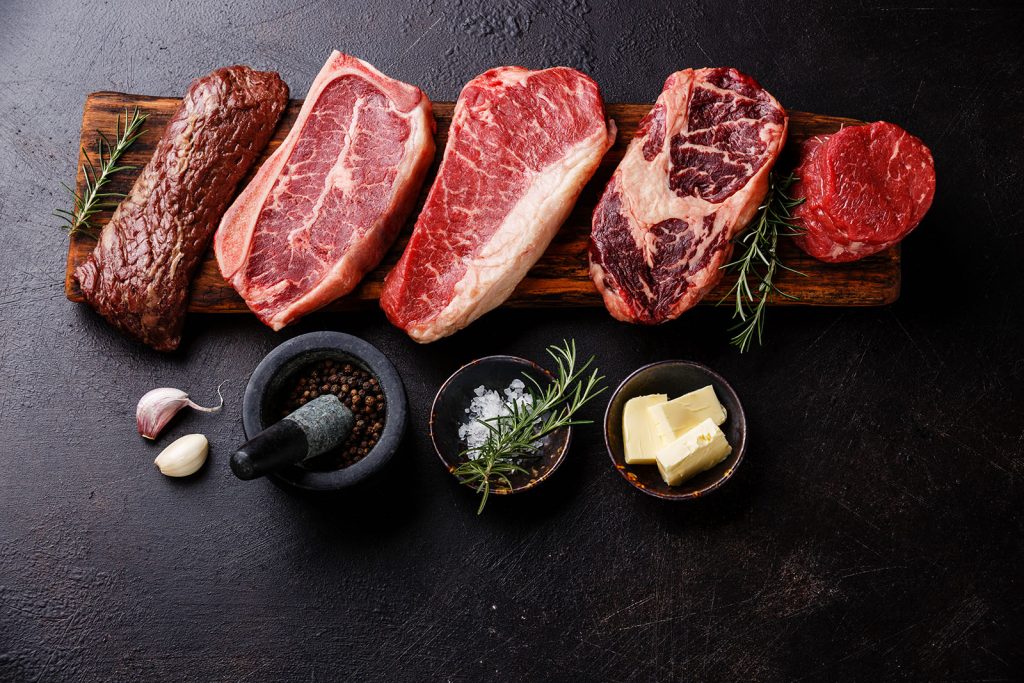 I’m going to boil it down to the practical for this overview:

Fat equals flavor. It also provides your lean protein with a little protection against the heat while cooking.

If I’m looking to grill a steak that wows people, I go with something with nice, consistent marbling throughout.

Too much fat (big, thick chunks of the hard stuff) will leave a waxy sort of taste in the mouth, which is gross. This can be trimmed off before seasoning.

Too little fat and your protein will lack flavor or bark, and has a higher risk of drying out.

You can compensate for too little fat by adding more seasoning to enhance the flavor of lean protein, and by coating the meat with olive oil before grilling to protect from drying out. 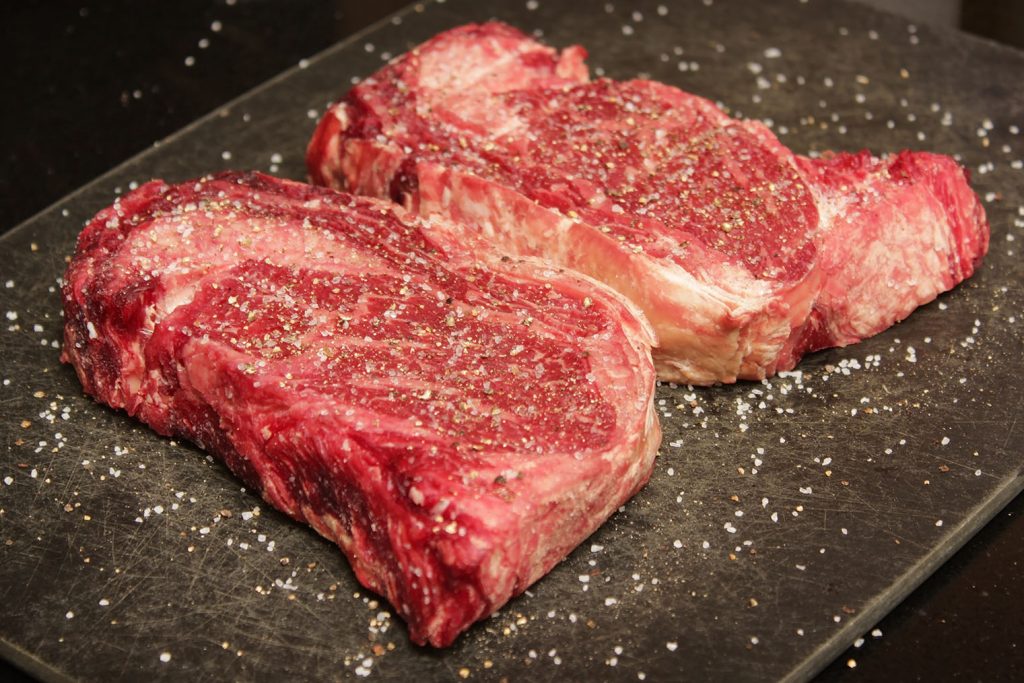 You can get fancy with your rubs, but some of the best steak places in the world season with nothing but good salt and fresh cracked pepper.

That’s what I generally do, although if I’m limited on time, I’ll add garlic and onion powder, and maybe something herbaceous like coriander.

I usually stick to what I’ve heard described as “the French ratio” of salt to pepper, which is a 2:1.

I like Himalayan salt, which I order in massive bags from the San Francisco Salt Company. It’ll last you 2-3 years per bag, and you can put it in mason jars to give as great gifts.

For pepper, I use fresh cracked black pepper.

For my rub, I add 2:1 himalayan salt and fresh cracked pepper into a spice mixing bowl. For 6 steaks, I’ll generally use about 2-3 tablespoons of salt and 1-1.5 tablespoons of black pepper.

Mix it all up with your finger.

I put my steaks on a pan deep enough to hold them in my marinade, then start seasoning. I use the wet hand/dry hand method. One hand moves the steaks around, the other pinches and sprinkles the rub. 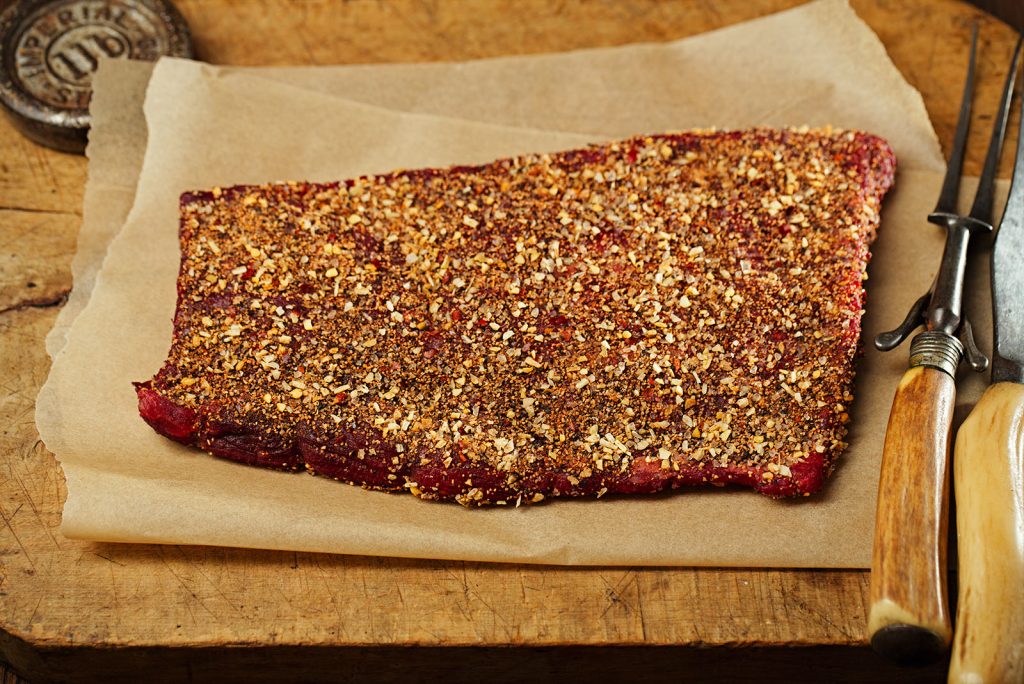 I cover the steaks completely with the rub. Sides, too! You want equal flavor in every bite. Pat the rub in firmly to really jam that flavor in there. You want it to stick and absorb while marinating and grilling.

After the steaks have been covered top, bottom and sides, rub them down with olive oil. I usually have 1/4″ of olive oil in the bottom of by pan, and they’re just soaking up some of that oil, salt and pepper like little meat sponges during the marinade.

Cover them with foil once they’re covered in rub and oil, and set them in the fridge. Marinate overnight, or as long as possible. In a pinch, you can cook immediately; the flavors just won’t be as consistent through the meat. Particularly if the meat is thicker than a 1” cut.

Your meat should be 100% room temperature before grilling. It should feel relaxed and warm. If you throw it on the grill when it’s cold, you’ll get a charred exterior and a raw interior.

Room temperature meat is likelier to give you that nice bark on the outside, with that little cherry of pink in the middle.

I heat my grill to about 500f before I throw the meat on there. If you don’t preheat to at least that temperature, you won’t get the sexy grill marks and caramelized fats on your bark.

For thick, well marbled steaks like sirloin, ribeye or filet mignon, I prefer to cook at two temperatures. Hot and fast to get the above mentioned grill marks and bark, low and slow to cook through to medium.

Use the hand method to check for tenderness. Poke it and see if it feels like the soft, spongy part at the base of your thumb, or the harder bone as you probe lower towards your wrist.

If it feels tender and juicy, it probably is! 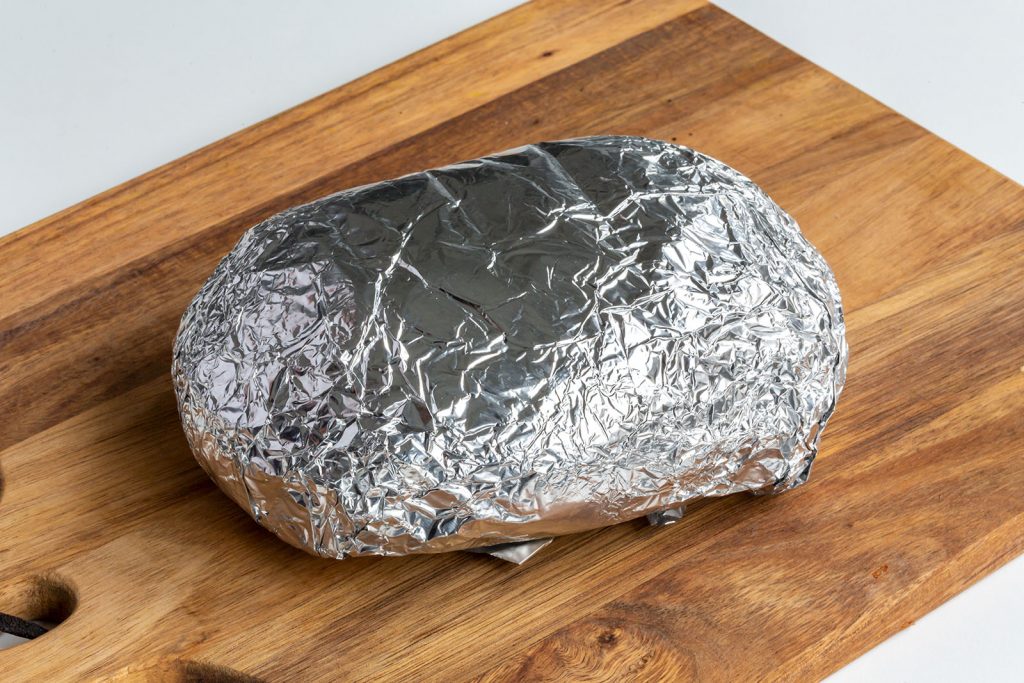 In my first 2-3 dozen attempts at steak, I got my flavors down, I got my bark and grill marks down, I got my doneness down, and I STILL was producing steaks that somehow weren’t as juicy or tender as others I’d had.

The difference, I discovered, was proper resting. Resting is SUPER important and is often skipped or done badly.

Here’s what I learned, in nutshell: 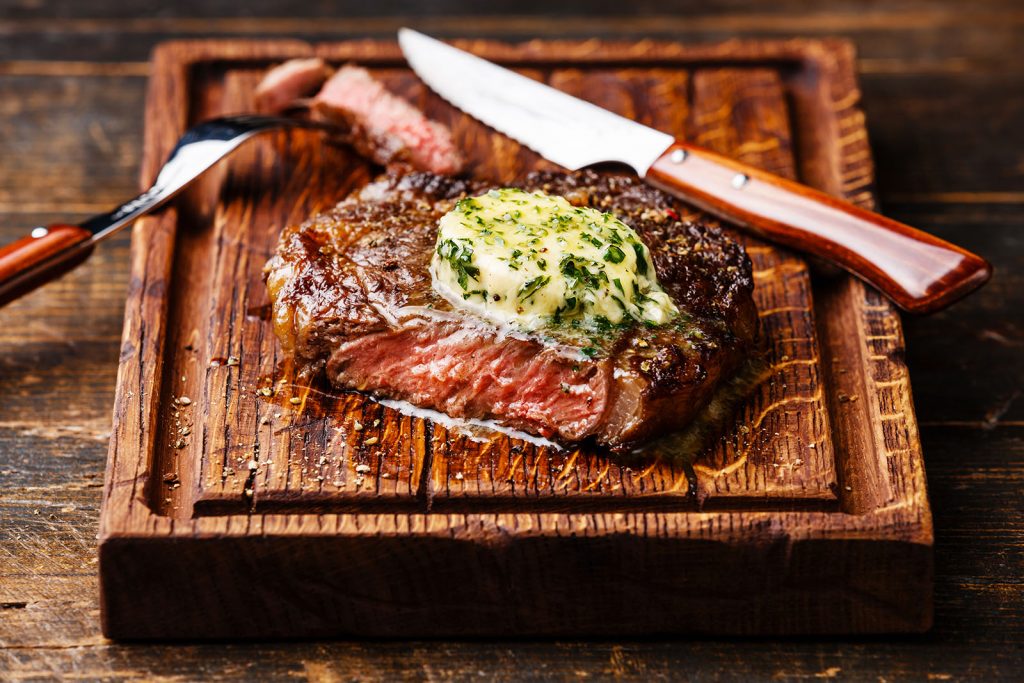